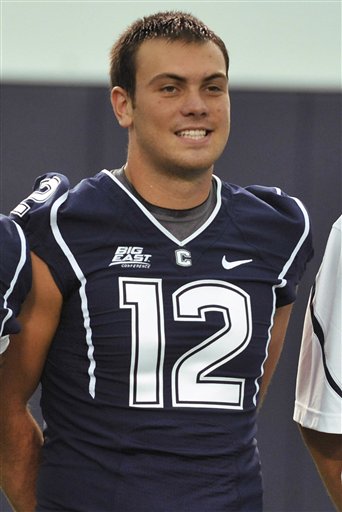 HARTFORD, Conn. (AP)—Connecticut quarterback Cody Endres has been suspended for the remainder of the season for an unspecified violation of university policies.

The junior had already served a monthlong suspension in September for a violation of school rules. After returning, he became the starting quarterback.

He replaced senior Zach Frazer midway through the Huskies’ game with Buffalo on Sept. 25 with the score tied at 14 and led UConn to a 45-21 win.

Endres has thrown for 471 yards and five touchdowns with two interceptions in three games for Connecticut (3-3), the win over the Bulls, a 40-21 victory over Vanderbilt, and a 27-24 loss at Rutgers.

A release from the school Wednesday said the latest suspension will remain in effect through the end of the academic year, which means Endres would miss spring practice, but could conceivably return for his senior season.

The news came a day after coach Randy Edsall announced that starting offensive guard Erik Kuraczea had withdrawn from the school. The sophomore was suspended with Endres in August, and returned with him in September. He started the last two games at left guard.

The school would not say if Endres’ violation and Kuraczea’s departure are linked.

This is great news for the Cards. Both available quarterbacks for the Huskies are very inexperienced.