I’m not sure if any of these players are actively being recruited by Louisville at this point, but I’m pretty confident the coaching staff will be keeping tabs on them.

Darryl Hicks – 2013, 6’4 170 lb. SG – Trinity High School: Hicks led Shelby County High School to the Sweet 16 as a freshman in 2010 and put up a very impressive 30 point performance against Ballard. After his freshmen season he transferred to Trinity high school in Louisville. Due to KHSAA transfer rules Hicks had to sit out this past season. He’s a great perimeter shooter with division one size. Hick’s currently holds offers from Arizona and Indiana. Hoop Scoop online ranks Hicks as the 31st best player in the 2013 class.

Darryl Baker – 2013, 6’1 175 lb. SG, Jeffersonville High School: Baker has been receiving national attention since he was an 8th grader. In October of 2010 he suffered a torn ACL which required him to miss his entire freshman season. His momentum has slightly slowed down in the past year, but he is still considered an elite prospect. Butler, Louisville, Ohio State, Indiana, and Xavier have all expressed interest.

Quentin Snyder – 2014, 6’0 160 lb. PG, Ballard High School: Snyder averaged 8 points a game as an 8th grader at Fern Creek high school in 2009-2010. However, he eventually enrolled at Ballard where he averaged double figures as a freshman. I had a chance to watch Snyder play on the AAU circuit when he was in middle school, and the kid was a human highlight reel. Snyder was invited to play in last summer’s prestigious Fab Frosh Camp in Chicago. ESPN considers him a 5 star recruit.

Mike Smith – 2013, 5’10 PG, Lexington Sayre High School: Smith has led Fayette County in scoring the past two seasons. He averaged 23 points, 5 assists, and 3 rebounds as a sophomore this past season. He is one of the better perimeter shooters in the state. He sometimes doesn’t get the credit he deserves because he doesn’t play for an elite level school, but the kid can flat-out play. 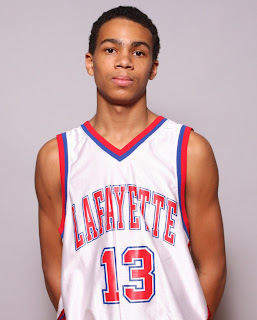 Jackson Davis – 2014, 6’9 200 lb. PF, Lexington Lafayette High School: After averaging 6 points and 6 rebounds as an 8th grader for Lafayette, Jackson averaged around 15 and 10 as a freshman this past season. Jackson attended the USA National Basketball Development Training Camp last summer. His father Jonathan played for Coach Pitino at Kentucky. At 6’9 200 lbs., Davis is still a 15-year-old kid. His potential is through the roof.