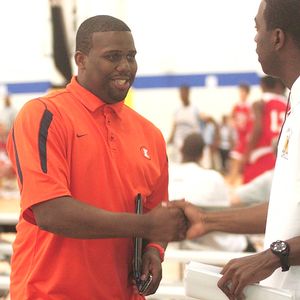 According to Jeff Goodman of Fox Sports, the University of Louisville is interested in Illinois assistant coach Jerrance Howard.

Howard is without a doubt one of the hottest names on the recruiting scene right now, but I find it highly unlikely that he will be hired at Louisville.  Howard has been targeted by Memphis, and Kentucky over the last few seasons and has turned down both jobs. After last season, Illinois gave Howard a raise to $180,000 per year and extended his contract through 2013. He also will receive a $50,000 signing bonus and a onetime payment of $75,000 if he completes the terms of the contract. With current assistant Ralph Willard earning a salary of $350,000 annually I don’t see Louisville being able to put together an offer attractive enough to lure Howard away from Illinois.